What is infant hearing screening for?  Doesn’t every child have their hearing tested in kindergarten?

Many parents believe that they would notice if their child could not hear.  However, it is particularly difficult for parents to tell if their baby can hear or not. Infants are very aware of all activity around them -they turn their heads and may seem to respond to sounds, giving a false impression that their hearing is normal.  Believe it or not, the average age at which parents detect deafness in their own child is 2 years and 4 months. The primary way parents detect hearing loss in a deaf child is that the child does not begin to speak after 2 years.  It is inquiries to doctors about this lack of speech that typically led to the detection of the child’s deafness. When hearing loss is detected this late, it often results in compromised speech and language abilities, even when they are treated with hearing aids after detection.  This was common 30 years ago, but less so today.

Today, children have their hearing tested before leaving the hospital after birth. If the child fails, then the child’s hearing is tested and retested until the presence of normal hearing can be verified.  If infants do not pass this screening within the first few months, they are sent for a medical evaluation to determine if there is either a blockage in the ear canal or fluid in the middle ear that is causing the hearing failure.  When these problems are ruled out, a final diagnosis of hearing loss is confirmed and the use of hearing aids can be implemented by 6 months of age. Children detected and treated early, experience normal speech and language development.  By 5 years of age their speech and language are indistinguishable from their normal hearing playmates.

Yes, hearing is tested in kindergarten, 1st grade and sometimes later in school – but it should be clear, after what has been described above, that waiting until 1st grade to detect a hearing loss is far too late to ensure excellent speech and language development.

What is an audiogram?

An audiogram is a graph that demonstrates the hearing sensitivity of individual ears at individual frequencies.  To obtain an audiogram, the subject is placed in a sound booth and given a tone at a specific frequency. The intensity of the tone is then increased and decreased until the sound level at which the child can definitely hear the tone is determined.  For adults and older children this involves pushing a button.  For young children this may involve responding to a tone with a turn of the head.  This test is repeated at each frequency from low to high so that a chart of hearing levels at all frequencies results.  A normal audiogram demonstrates sensitivity to very soft sounds at each frequency band. 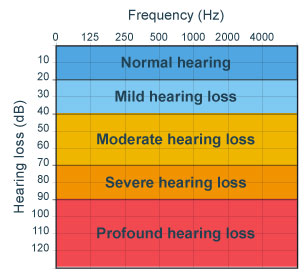 In infants and very young children, an audiogram is difficult to obtain because doctors cannot rely on the infant or toddler to tell them consistently when they can hear the audiogram tones.  Other methods of testing the threshold of hearing are therefore used that do not require the child’s cooperation.  These other tests include oto-acoustic emissions(OAE), auditory brainstem response(ABR) testing and cortical response testing.

What is an ABR test?

ABR stands for auditory brainstem response.  This is also referred to as brainstem evoked response audiometry (BERA) or brainstem auditory evoked response (BAER, pronounced “bear”).  This form of electrical testing of hearing does not require any responses from an infant and is the gold standard for confirming infant and pediatric hearing loss. During an ABR test, a child simply receives clicking sounds in the ear through a small earpiece. Some electrodes are placed on the scalp and around the ear.  Thousands of click sounds are given through the earpiece and the electrical responses from the auditory nerve connecting the inner ear to the brain are measured at a particular time period after each click.  By averaging the electrical responses from thousands of clicks, the response of the auditory nerve can be confirmed.  By decreasing the intensity of the clicks until the nerve response disappears, the child’s hearing level can be determined.  The advantage of ABR is that it will detect auditory neuropathy, a “sneaky” form of hearing loss in which a child will respond to and hear sounds but does not have synchronization of firing in the auditory nerves sufficient for speech development.  These children will not have synchronization of the nerve responses to individual clicks sufficient for an ABR response to be present. Children with auditory neuropathy can pass otoacoustic emissions screening(OAE) tests.

The only requirement for successful ABR testing is for the child is to be quiet so that muscular activity is limited.  Since an ABR cannot be performed on a child who is crying or fussy, the ABR is often done after feeding or while the child is sleeping in the mother’s arms.  The ABR may also be done with sedation.

What is an OtoAcoustic Emissions test(OAE)?

Otoacoustic emissions (OAEs) are sounds given off by the inner ear when the cochlea is stimulated by a sound. When a sound vibration stimulates the cochlea, the outer hair cells contract and some of the vibration comes back out of the ear. The OAE can be detected as a nearly inaudible sound that echoes back into the ear canal.

In OAE testing sounds are put into the ear and a very sensitive microphone is used to measure the sounds that echo back. When OAEs are present it means the outer hair cells are present and working and that hearing levels are good (25 decibels or better). Infants may fail OAE hearing screening because the ear canals are blocked, because there is fluid behind the eardrum, or because significant hearing loss is present. If a child repeatedly fails AOE screening an ABR teas is ordered to determine the actual level of the hearing loss. OAEs are no longer recommended as the only method of hearing screening because children with poor hearing from auditory neuropathy have normal hair cells and can pass an OAE test.

Since it takes only a minute per ear no sedation is required to perform OAE testing, although the child should be quiet and resting.

What is Cortical Response Testing?

Like an ABR, Cortical Response Testing is done by measuring tiny electrical responses of the child’s hearing system to sounds.  Cortical response testing does not require any responses from the infant. It is used when there is a question about whether sound signals are arriving to the brain. This is a concern when no sound responses are found on other testing and sometimes when the hearing nerve cannot be seen on MRI. During this test, a child receives clicking sounds in the ear through a small earpiece and electrodes are placed on the scalp and around the ear.  Thousands of click sounds are given through the earpiece and the electrical responses created when the signals reach the brain are measured. This  testing can be done on a sleeping infant but sedation may be needed in some cases.